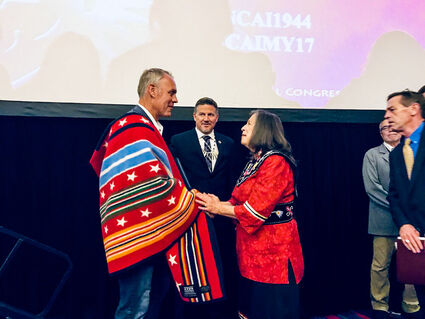 Then-Secretary of the Interior Ryan Zinke, left, is greeted by Chief Lynn Malerba of the Mohegan Tribe and then-Chairman Kevin Brown, center, of the Mohegan Tribe, at the National Congress of American Indians mid-year conference at Mohegan Sun on the Mohegan Reservation in Connecticut on June 13, 2017. Photo by Indianz.Com (CC BY-NC-SA 4.0)

A federal ethics probe has concluded that former Secretary of the Interior Ryan Zinke, who is running to represent Montana's western district in the U.S. House, misled an internal ethics watchdog during a probe into the department's decision not to act on a gaming application from two Native American tribes.

The report, instigated in 2017 and released Wednesday by investigators working under Trump-appointed Interior Secretary Inspector General Mark Greenblatt, said Zinke and his then-chief of staff made statements to investigators "with the overall intent to mislead them," violating their "duty of candor."

The probe stemmed from a joint application by two New England tribes, the Mashantucket Pequot and Mohegan, to open a casino on non-tribal land in Connecticut, a move that would require Interior's approval under the Indian Gaming Regulatory Act. In 2018, Politico reported that the department had initially intended to approve the application but reversed course on the eve of a deadline to act after a concerted lobbying effort by casino giant MGM Resorts International against the project.