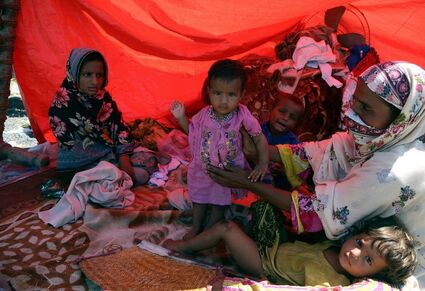 A displaced family taking refuge on a roadside after fleeing their flood-hit home poses for a photo on the outskirts of Peshawar, Pakistan, Sunday, Aug. 28, 2022. Army troops are being deployed in Pakistan's flood affected area for urgent rescue and relief work as flash floods triggered after heavy monsoon rains across most part of the country lashed many districts in all four provinces.

Flash flooding from the heavy rains has washed away villages and crops as soldiers and rescue workers evacuated stranded residents to the safety of relief camps and provided food to thousands of displaced Pakistanis.