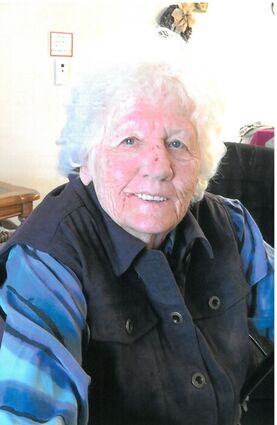 A Memorial Service for Alice Anderson of Roseau, MN will be held on Saturday, August 27, 2022 at 11:00 AM at Riverside Lutheran Church in Wannaska. Interment will take place at Mickinock Cemetery in Wannaska, MN.

Alice Caroline (Nelson) Anderson passed away on August 18, 2022, at Oak Crest Senior Housing in Roseau, MN at the age of 95.

Alice was born on December 11, 1926, to Alfred and Annie (Williamson) Nelson near Wannaska, MN. She attended the Edberg School in Mickinock Township through eighth grade and also attended Roseau High School. As a young girl she was happiest when she could be outside helping her dad milking the cows and doing other farm chores.

On April 16, 1947, Alice was united in marriage to Herman Anderson. After their marriage, Herman and Alice started their own dairy and grain farm near Wannaska and were blessed with four children – Karen, Harlan, Susan, and Daniel. In the early sixties the dairy cows were sold and Alice went to work at Polaris Industries. Later she worked at the Roseau Hospital as well as other places.

Alice had a strong faith in God, a great sense of humor and enjoyed caring for other people at the hospital and as a chiropractic assistant. She also enjoyed singing, dancing, visiting relatives, friends, and neighbors. She especially enjoyed going to the Rams hockey games, watching the Minnesota Wild games on TV and (watching) those games on the radio when her eyesight failed.

EDITOR'S NOTE: Her grandson, Nathan Anderson, who was a teacher at RLHS from 2000-2007, wrote in an Email, "In the early 2000's she worked at the 7 Clans Hotel (in TRF) doing housekeeping then moved to the casino in security. She loved working there and always spoke so kindly of her coworkers and those she got to know from Red Lake. Her and I always loved sharing our wonderful stories about the love and kindness Red Lake always showed us. Even though it was left out of her obituary, know that she always held space in her heart for the Red Lake Nation up until her last day."