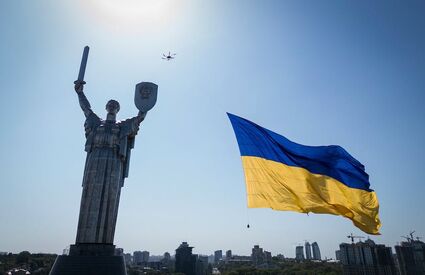 A drone carries a big national flag in front of Ukraine's the Motherland Monument in Kyiv, Ukraine, Wednesday, Aug. 24, 2022. Kyiv authorities have banned mass gatherings in the capital through Thursday for fear of Russian missile attacks. Independence Day, like the six-month mark in the war, falls on Wednesday.

KYIV, Ukraine - Russian President Vladimir Putin ordered a major buildup of his country's military forces Thursday in an apparent effort to replenish troops that have suffered heavy losses in six months of bloody warfare and prepare for a long, grinding fight ahead in Ukraine.

The move to increase the number of troops by 137,000, or 13%, to 1.15 million by the end of the year came amid chilling developments on the ground in Ukraine:

- Fueling fears of a nuclear catastrophe, the Zaporizhzhia power plant in the middle of the fighting in southern Ukraine was briefly knocked out of commission by fire damage to a transmission line, authorities said. Ukrainian President Volodymyr Zelenskyy said the plant's emergency backup diesel generators had to be activated to provide power needed to operate the plant.