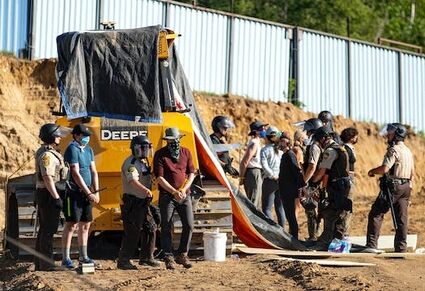 In June 2021, Indigenous protesters and their allies occupied an Enbridge pump station in Clearwater County, some chaining themselves to equipment. Law enforcement moved in later and made arrests.

The two activists were making their stand for the environment, latching themselves together inside one of the large pipes during construction of the Line 3 oil pipeline in Minnesota.

Prosecutors say what they were doing that day in July 2021 was criminal, even beyond what's typically charged after civil disobedience. St. Olaf College student Madeline Bayzaee and Amory Lei Zhou-Kourvo of Michigan were both charged with one count of felony aiding attempted suicide - each other's. They also face charges of felony obstruction of legal process and gross misdemeanor trespass on critical public service facilities.

Canadian tar sands oil has been flowing for nearly a year now through Enbridge Energy's pipeline and the law enforcement teams in riot gear are long gone. The charges against Bayzaee and Zhou-Kourvo are among the approximately 200 criminal cases still open from the long series of Line 3 protests, one of the largest environmental actions in Minnesota history.