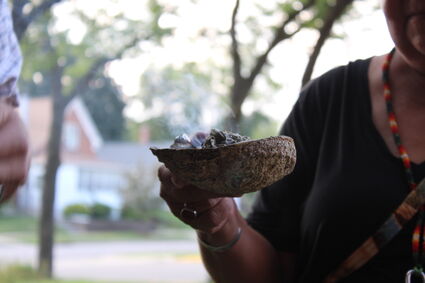 Lisa Bellanger, Co-Director of the American Indian Movement, smudges a group of supporters on Tuesday, August 23, advocating for a policy that allows students to smudge in all schools within the Saint Paul School District. (Photo: Darren Thompson for Native News Online)

"The policy that we want to bring forward is to introduce smudging as a cultural, social, and emotional intervention," said SPPS's American Indian Education Program Supervisor John Bobolink during Tuesday's meeting. "I know that there has been use of smudging with religious ceremonies or spiritual ceremonies, but smudging is not exclusive to those events."