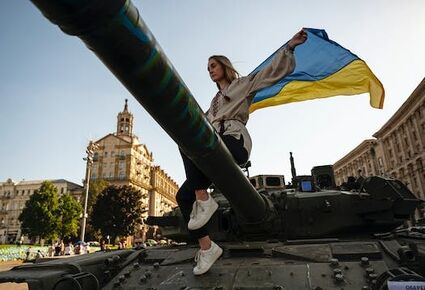 A Ukrainian woman holds a fluttering national flag while seated atop a captured Russian tank in Maidan Square in central Kyiv, Ukraine on Aug. 24, 2022.

The lethal attack took place in Chaplyne, a town of about 3,500 people in the central Dnipropetrovsk region, Ukrainian news agencies quoted Zelenskyy as telling the U.N. Security Council via video. The president's office also reported that an 11-year-old child was killed by rocket fire earlier in the day in the settlement.

"Chaplyne is our pain today," Zelenskyy said in his nightly video address to the nation.