The IAIA Making History Event Raises Over $834,000 for Student Scholarships 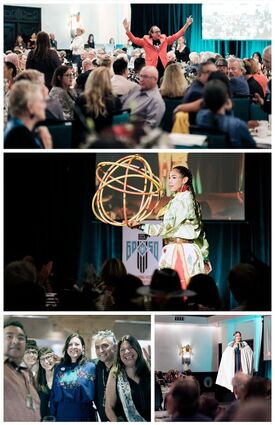 On the evening of August 17, supporters and friends of the Institute of American Indian Arts (IAIA) came together for an important fundraising event and auction at La Fonda on the Plaza in Santa Fe. This extraordinary event raised vital funds for student scholarships while celebrating IAIA's sixtieth anniversary and the fiftieth year of IAIA's Museum of Contemporary Native Arts (MoCNA).

The event was a resounding success thanks to the generous sponsors, donors, artists, and art collectors who opened their hearts to support IAIA's mission "to empower creativity and leadership in Indigenous arts and cultures through higher education, lifelong learning, and community engagement." The event reached beyond La Fonda's ballroom and across continents to raise over $834,000 for student scholarships-and we continue to receive contributions for this annual initiative supporting student success. Sponsorships, donations, and event tickets resulted in over $306,000 in funding, and an incredible $379,000 was raised through abundant donations during the paddle call.

The highlight of the evening was the live auction of one-of-a-kind artworks created and donated by talented and generous IAIA alums specifically for the event and to "pay it forward" to current students. The live auction, hosted by event sponsor Santa Fe Art Auction, raised almost $125,000 and reached over 4,500 registered bidders in 35 countries. The following artworks were sold in the live auction:

• First Day, a painting that expresses the past, present, and future of IAIA by Tony Abeyta (Navajo) '86 and Ofuskie (Mvskoke Nation) '15

• In This Together, a mixed-media piece that embraces different voices by Rose B. Simpson (Santa Clara Pueblo) '18, April Holder (Sac and Fox Nation) '08, and Marty Two Bulls Jr. (Oglala Lakota) '11

• The Last Deity, a mixed-media collage on paper by David Bradley (Chippewa) '79 and Tony Abeyta that was started as a collaborative piece in 1990 and revisited and finished in 2022 for the IAIA Scholarship Auction

• Hero and Legends Cape, an award-winning work of fashion with symbols of strength and love, created by Wendy Ponca (Osage) '78

On a night filled with good company, moving speeches, live performances, and a reading by the award-winning author, musician, and twenty-third Poet Laureate of the United States Joy Harjo (Mvskoke) '68, a high point of the evening came when longtime IAIA supporters, Lee Ann and Marshall Hunt (Seminole Nation of Oklahoma), pledged an astounding $250,000 gift to support student scholarships. The room erupted in grateful applause as everyone rose for a prolonged standing ovation.

As IAIA President Dr. Robert Martin (Cherokee Nation) said in a recent op-ed published in the Santa Fe New Mexican, "the Scholarship Event is one of the most important events we hold all year. [...] We depend on scholarships [...] because we want our students to graduate debt free, and it's motivating for them to know that somebody cares enough to invest in their futures."

We cannot thank the Board of Trustees, IAIA Foundation Board of Directors, the dedicated event planning committee, staff, volunteers, alums, and the hundreds of generous supporters enough for the success of this event.

To further extend the impact of the event, the online auction at http://www.iaia.edu/bid will remain open until September 1 at 5:00 pm (MDT). Every auction purchase supports student scholarships. For more information on how you can support IAIA and its students, please visit http://www.iaia.edu/support, email foundation@iaia.edu, or call (505) 424-5730. Every gift of support, regardless of its size, makes a difference for our students.