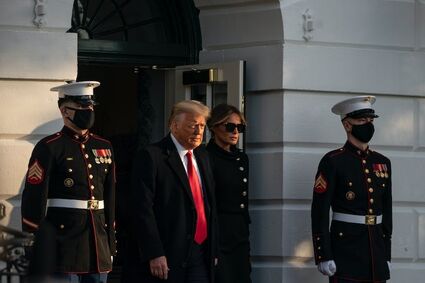 President Donald Trump and first lady Melania Trump leave the White House for the last time, in Washington on Jan. 20, 2021. Government documents that Trump had accumulated were with him in roughly two dozen boxes in the White House residence.

Four days before the end of the Trump presidency, a White House aide peered into the Oval Office and was startled, if not exactly surprised, to see all of the president's personal photos still arrayed behind the Resolute Desk as if nothing had changed - guaranteeing that the final hours would be a frantic dash mirroring the prior four years.

In the area known as the outer Oval Office, boxes had been brought in to pack up desks used by President Donald Trump's assistant and personal aides. But documents were strewed about, and the boxes stood nearly empty. The table in Trump's private dining room off the Oval Office was stacked high with papers until the end, as it had been for his entire term.

Upstairs in the White House residence, there were, however, a few signs that Trump had finally realized his time was up. Papers he had accumulated in his last several months in office had been dropped into boxes, roughly two dozen of them, and not sent to the National Archives. Aides had even retrieved letters from North Korean leader Kim Jong Un and given them to Trump in the final weeks, according to notes described to The New York Times.