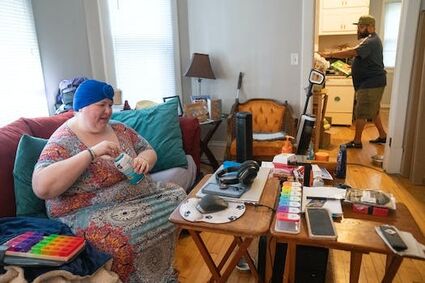 Maija Hitt took her medication for the day while her partner and caretaker, Umar Williams, made her breakfast Thursday, Aug. 18, at their home in St. Paul.

On an afternoon last September, Maija Hitt was discharged from a hospital in St. Paul with no idea of how she was going to survive on her own.

The 41-year-old had just experienced a mental health crisis and was suffering from a host of debilitating symptoms - including severe migraines, depression and insomnia - that made it impossible for her to care for herself. Desperate, she called a Ramsey County hotline to access home care services.

But weeks passed, and Hitt heard nothing. Then months went by, and Hitt began to grow dizzy from lack of food and sleep. Her anxiety and depression reached the point where she struggled to get out of bed. "It felt lonely and dehumanizing, like the wait would never end," said Hitt, who works as a medical transcriber.