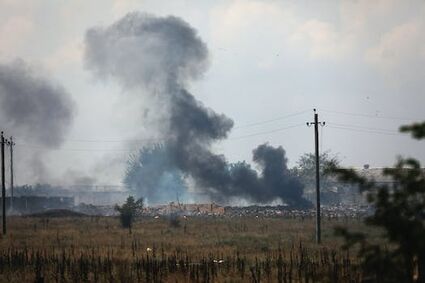 Smoke rises over the site of explosion at an ammunition storage of the Russian army near the village of Mayskoye, Crimea, Tuesday, Aug. 16, 2022.

KYIV, Ukraine - Explosions and fires ripped through an ammunition depot in Russian-occupied Crimea on Tuesday in the second suspected Ukrainian attack on the peninsula in just over a week, forcing the evacuation of more than 3,000 people.

Russia blamed the blasts in the village of Mayskoye on an "act of sabotage," without naming the perpetrators.

Separately, the Russian business newspaper Kommersant quoted residents as saying plumes of black smoke also rose over an air base in Crimea's Gvardeyskoye.