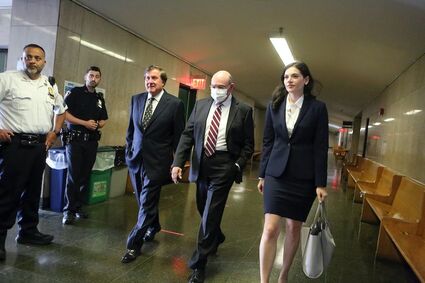 Allen Weisselberg, a longtime top executive at Donald Trump's family business, arrives at State Supreme Court in Manhattan, Aug. 12, 2022. Weisselberg, who was charged with participating in a tax scheme, will not cooperate with the district attorney's investigation into Trump.

NEW YORK - Donald Trump's longtime finance chief is expected to plead guilty as soon as Thursday in a tax evasion case that is the only criminal prosecution to arise from a long-running investigation into the former president's company, three people familiar with the matter told The Associated Press.

Trump Organization CFO Allen Weisselberg was scheduled to be tried in October on allegations he took more than $1.7 million in off-the-books compensation from the company, including rent, car payments and school tuition.

Prosecutors in the Manhattan district attorney's office and Weisselberg's lawyers met Monday with the judge overseeing the case, Juan Manuel Merchan, according to court records. The judge then scheduled a hearing in the matter for 9 a.m. Thursday but did not specify the reason.