A Black woman has never served in the Minnesota Senate. That's about to change. 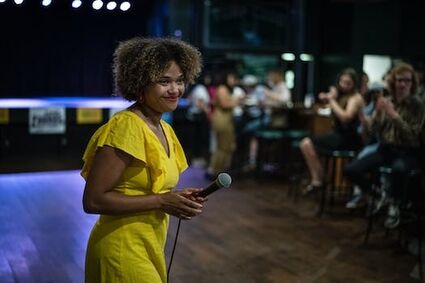 Clare Oumou Verbeten held a primary night party with other candidates on Aug. 9, 2022, at the Turf Club in St. Paul.

Clare Oumou Verbeten became aware of politics as a child tagging along with her mother, a Senegalese immigrant, as she emptied trash bins and polished desks at the DFL Party headquarters in St. Paul.

Years later, when Verbeten was on summer break from college, her mother marched into the party office she had cleaned for years and asked if her daughter could get an internship. It worked.

Now, Verbeten is poised to head to the state Senate representing a Roseville, Falcon Heights and St. Paul area seat in January, becoming the first Black woman to serve in the chamber in its 164-year history. She has company: Zaynab Mohamed and Erin Maye Quade won their primaries in Minneapolis and Apple Valley on Tuesday and are also expected to prevail in November, sending not one but a caucus of Black women to the Minnesota Senate for the first time next year.