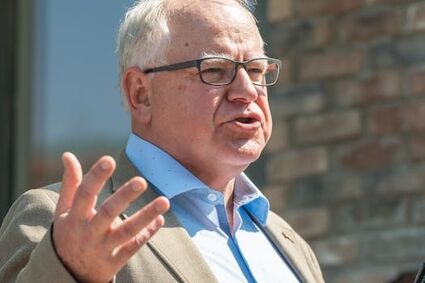 Gov. Tim Walz says the state will continue to assist with public safety in Minneapolis.

Gov. Tim Walz signaled the start of the fall gubernatorial campaign on Thursday with a news conference to highlight his crime-fighting credentials, an issue that his GOP opponent Scott Jensen wants to use to deny the governor a second term.

Standing outside U.S. Bank Stadium in downtown Minneapolis, Walz was accompanied by a cadre of top state law enforcement leaders as he pledged to continue the "surge" of state aid to Minneapolis to fight gun violence, carjackings and other crimes.