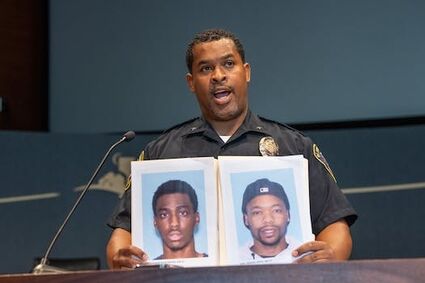 At a news conference Monday, Bloomington Police Chief Booker Hodges held up photos of Shamar Alon Lark, left, and Rashad Jamal May, sought in connection with gunfire inside the Mall of America in Bloomington last week.

A pair of suspects have been arrested in Chicago following last week's gunfire inside a crowded store at the Mall of America, police said Thursday.

Shamar Alon Lark, 21, of Minneapolis and Rashad Jamal May, 22, of Burnsville were arrested during a traffic stop conducted by the Chicago FBI's Fugitive Task Force about 2:25 p.m. Thursday, Bloomington Police Chief Booker Hodges said during a news conference Thursday evening. The two had just left a barbershop and were in a vehicle with another person who was driving.

Lark and May were arrested without incident and are in the process of being booked into the Cook County jail in Illinois and then will be extradited to Minnesota, according to Hodges.