Man who tried to breach FBI office killed after standoff 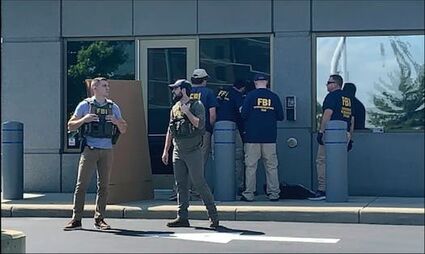 In this image taken from video, FBI officials gather outside the FBI building in Cincinnati, Thursday, Aug. 11, 2022.

WILMINGTON, Ohio - An armed man clad in body armor who tried to breach the FBI's Cincinnati office on Thursday was shot and killed by police after he fled the scene and engaged in an hourslong standoff in a rural part of the state, the Ohio State Highway Patrol said.

The confrontation came as officials warned of an increase in threats against federal agents in the days following a search of former President Donald Trump's Mar-a-Lago estate in Florida.

The man is believed to have been in Washington in the days leading up to the Jan. 6, 2021, insurrection and may have been present at the Capitol on the day of the attack, according to a law enforcement official briefed on the matter. The official could not discuss details of the investigation publicly and spoke on condition of anonymity.