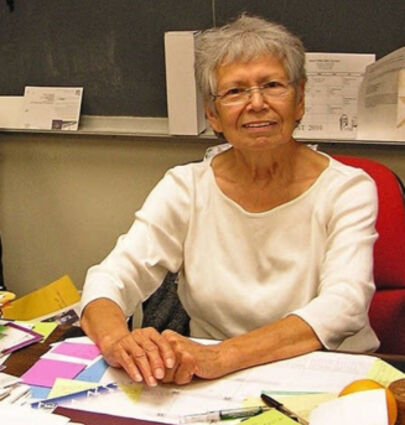 Norby's children who predeceased her are: Michael Blake and Steven Blake. Her grandson/son, Jesse Blake also predeceased her. Her remaining children are: Francis Blake, Jr. and Valerie Blake. Her grandchildren remaining are: Negahnee (Randy Larson) Blake and great-grandchild, Maddie Blake. Norby was born on the White Earth Reservation at home. She grew up on the White Earth Reservation and graduated from Waubun High School. After leaving White Earth, she lived in Detroit Lakes for a while. Then, she moved to the Minneapolis-St. Paul area where she met Francis Blake, Sr. and married him. Then, she gave birth to Valerie and Francis, Jr. Under the Relocation program, they moved to California so Francis, Sr., could drive truck for Red Owl store.

Subsequently, they moved back to the Twin Cities where Mike and Steve were born. After that, Norby became actively involved in numerous community activities. She worked with Indigenous people involved in family health, substance use disorder, mental health and Elders issues. She also was very involved in A.A. groups where the conversations began about Indigenous people's needs in the urban area. She worked with Lutheran Deaconess Hospital to address Indigenous health needs. Then, she worked for the State of Minnesota for many years in the mental health field. Upon her retirement, the Governor declared that day: Norby Blake Day to honor her many contributions to her Indigenous community. Channel 2 has done a documentary about Norby's life. She was very passionate about helping her community to help them to heal and to be healthy. She was also a champion at getting others active and interested in helping her beloved Indigenous community.