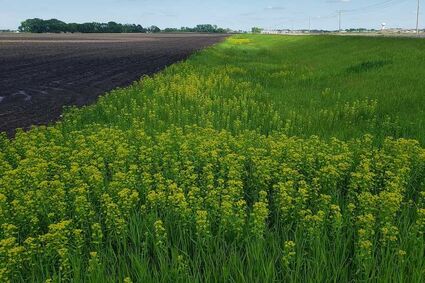 Invasive plant species do more than harm agriculture and native species as they reshape landscapes. They also cause economic losses of more than $20 billion annually in the U.S. alone. Identifying where and how quickly invasive plants are spreading is critical to fighting an invasion. Scientists and land managers currently use on-site field surveys of population size, density or growth rates to obtain this information, which can be prohibitively expensive and labor intensive. Furthermore, invasive species are spreading so rapidly around the world that traditional methods have become untenable. New techniques are urgently needed to track invasive species more efficiently.

A recent study co-authored by University of Minnesota professor David Moeller, along with graduate student Thomas Lake and research scientist Ryan Briscoe Runquist, evaluated one such technique and the results are encouraging. The research team developed deep learning models known as convolutional neural networks, which allow a computer to learn to identify objects of interest in satellite images. Using the deep learning models, computers scanned satellite imagery of the Twin Cities region for an invasive plant known as leafy spurge (Euphorbia virgata sometimes also referred to as Euphorbia esula). The team used both higher resolution imagery that is taken rarely and lower resolution imagery that is taken daily by satellites. They wanted to determine whether a series of lower resolution images taken across seasons could be used for accurate detection of the plant.

Funding for this project was provided by the Minnesota Invasive Terrestrial Plants and Pests Center through the Minnesota Environment and Natural Resources Trust Fund as recommended by the Legislative-Citizen Commission on Minnesota Resources (LCCMR).

"Time series analysis is relatively new in this type of deep learning model so we were really excited to find that it worked so well at identifying leafy spurge populations." said Briscoe Runquist. "Deep learning allows scientists to discover patterns that would have been previously impossible to detect."

The study found that:

• The deep learning models detected leafy spurge in the Twin Cities region with greater than 96% accuracy.

• The models incorporating a temporal series of images derived predictive power from the timing of plant emergence, flowering and senescence.

The findings suggest that deep learning models can accurately identify individual species over complex landscapes with satellite imagery, even if a temporal series of lower resolution images is used. This means that in the future, deep learning models have great potential to dynamically track invasive species over time using publicly available satellite images. Future research will track how leafy spurge has spread over the Great Plains in the past 35 years and predict how its distribution is likely to change in the future with climate change.

According to Moeller, "Invasive species are more difficult than ever to manage and surveillance via satellites is a low-cost, rapid method for dynamically monitoring invasions."