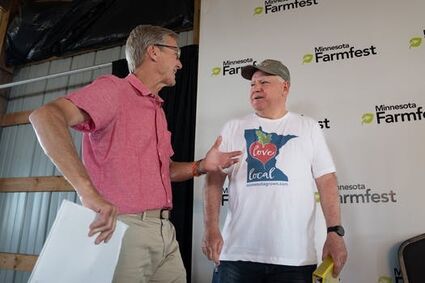 GOP candidate for governor Scott Jensen (left) and DFL Gov. Tim Walz, who debated for the first time at Farmfest, didn't attract major opposition within their own parties.

Minnesota DFL Gov. Tim Walz and Republican opponent Scott Jensen easily dispatched their nominal opposition in Tuesday's primary election, setting the stage for a high-stakes general election battle expected to draw in millions of dollars from across the country.

The two candidates have already spent months attacking each other on abortion access, the economy and crime, painting a dire portrait of the future of the state if the other is elected governor in the fall.

"The labor force has been wrecked [because] of your policies and there are staffing shortages everywhere you go," Jensen tweeted at Walz on Election Day. "Meanwhile 9% inflation & grocery store shelves empty! Governor, what's the plan?"