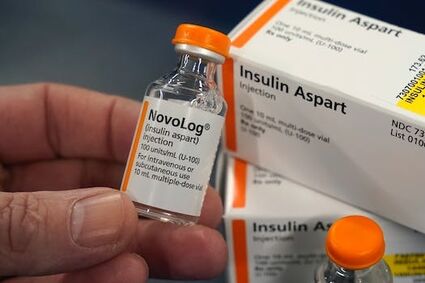 Insulin is displayed at Pucci's Pharmacy in Sacramento, Calif., on Friday, July 8, 2022.

WASHINGTON – Republican lawmakers on Sunday successfully stripped a $35 price cap on the cost of insulin for many patients from the ambitious legislative package Democrats are moving through Congress this weekend, invoking arcane Senate rules to jettison the measure.

The insulin cap is a long-running ambition of Democrats, who want it to apply to patients on Medicare and private insurance. Republicans left the portion that applies to Medicare patients untouched but stripped the insulin cap for other patients. Bipartisan talks on a broader insulin pricing bill faltered earlier this year.

The Senate parliamentarian earlier in the weekend ruled that part of the Democrats' cap, included in the Inflation Reduction Act, did not comply with the rules that allow them to advance a bill under the process known as reconciliation - a tactic that helps them avert a GOP filibuster. That gave the Republicans an opening to jettison it.