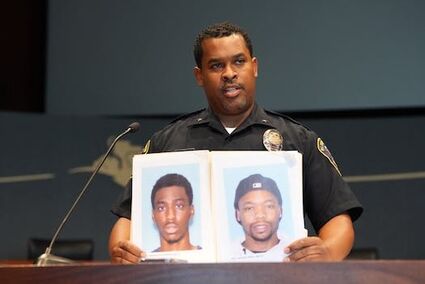 At a news conference Monday, Bloomington Police Chief Booker Hodges held photos of Shamar Alon Ramon Lark, left, and Rashad Jamal May, sought in connection with gunfire at the Mall of America.

Two cousins who work at a hotel near the Mall of America and one of their friends were charged with felonies Monday accusing them of helping two men escape after one of them fired three rounds inside a crowded mall store.

Denesh Raghubir, 21, of Minneapolis; Selena Raghubir, 23, of Bloomington; and Delyanie Kwen-Shawn Arnold, 23, of Burnsville, were charged with aiding an offender to avoid arrest. They were being held in the Hennepin County jail Monday evening while two suspects remain at large.

Court documents identify the shooter as Shamar Alon Lark, 21, of Minneapolis, who is shown in security videos with Rashad Jamal May, 22, of Burnsville, fleeing a fight between four other individuals that led to Lark firing several shots.