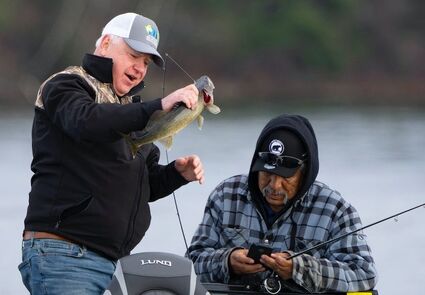 Gov. Tim Walz inspected the walleye he caught while Chairman Faron Jackson Sr. of the Leech Lake band of Ojibwe pulls up the camera on his phone during the 2022 Minnesota Governor's Fishing Opener on Cut Foot Sioux Lake near Lake Winnibigoshish.

Minnesota's chief executive will travel south for the 2023 Governor's Fishing Opener to Mankato on May 12-13.

Gov. Tim Walz on Monday announced his hometown of Mankato as the spot of the traditional opener. Walz, a DFLer, may or may not be there as governor. He's on the ballot for re-election this year and facing nominal opposition in Tuesday's primary. He will face a more serious GOP challenger in November, likely endorsed candidate and former state Sen. Scott Jensen.

There are more than 150 lakes within 30 minutes of Mankato. There are also three state water trails and the region has more than 50 miles of paved walking and biking trails, according to a release from the governor's office.