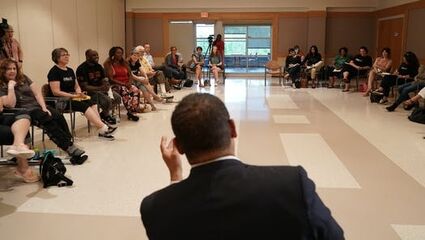 Minnesota Attorney General Keith Ellison met with Chaska residents in 2019 at a discussion hosted by Residents Organizing Against Racism.

A three-year-old racial discrimination lawsuit filed against the Eastern Carver County Schools by two Chaska students who are Black can proceed to a jury trial after the school district's motion for summary judgment was denied this week.

U.S. District Judge Michael J. Davis denied the motion Monday, ruling that the students "presented sufficient evidence to create factual questions as to whether the District violated their civil rights."

The case was brought in 2019 by an initial group of six Black students who alleged that teachers and administrators knowingly allowed racism in the schools, hurting their education and causing emotional distress. Four of the plaintiffs have since settled or dismissed their claims.