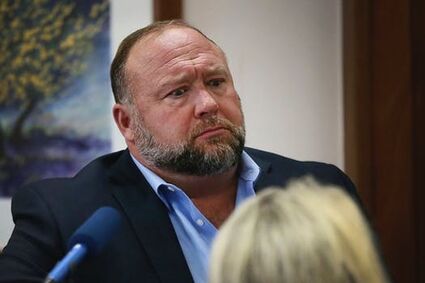 In this Aug 3, 2022. photo, conspiracy theorist Alex Jones attempts to answer questions about his emails during trial at the Travis County Courthouse in Austin, Texas.

AUSTIN, Texas - A Texas jury Thursday ordered conspiracy theorist Alex Jones to pay more than $4 million - significantly less than the $150 million being sought - in compensatory damages to the parents of a 6-year-old boy killed in the Sandy Hook massacre, marking the first time the Infowars host has been held financially liable for repeatedly claiming the deadliest school shooting in U.S. history was a hoax.

The Austin jury must still decide how much the Infowars host should pay in punitive damages to Neil Heslin and Scarlett Lewis, whose son Jesse Lewis was among the 20 children and six educators who were killed in the 2012 attack in Newtown, Connecticut.

The parents had sought at least $150 million in compensation for defamation and intentional infliction of emotional distress. Jones' attorney asked the jury to limit damages to $8 - one dollar for each of the compensation charges they considered - and Jones himself said any award over $2 million "would sink us."