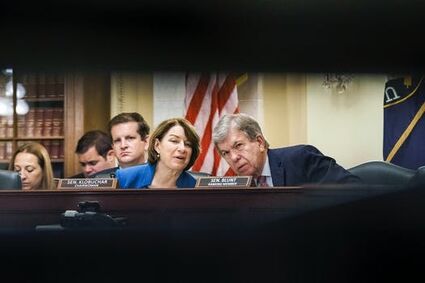 U.S. Sen. Amy Klobuchar, D-Minn., chair of the Senate Committee on Rules and Administration, spoke to Missouri GOP Sen. Roy Blunt during a hearing Wednesday about proposed updates to the Electoral Count Act.

A committee led by U.S. Sen. Amy Klobuchar, D-Minn., is looking to reshape the law covering how the presidential vote is certified as Congress responds to former President Donald Trump's attempt to overturn the 2020 presidential election.

Congressional Democrats' push to pass extensive voting and elections legislation was met with strong Republican opposition and failed last year. However, there may be a path to reforming what lawmakers and experts described Wednesday as a problematic 1887 law.

"The claim was made that the Electoral Count Act as it exists would allow the vice president to refuse to accept electoral votes that were lawfully cast," Klobuchar said during the hearing. "We watched in horror as a mob stormed the Capitol chanting 'Hang Mike Pence!' and got within 40 feet of the vice president of the United States. We know these claims about the vice president's authority were false."