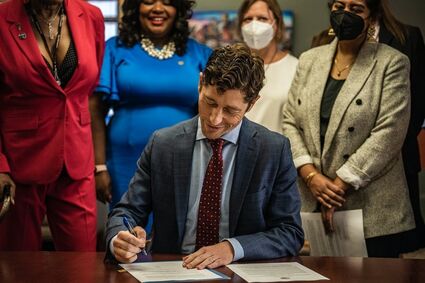 Minneapolis Mayor Jacob Frey signed an executive order Wednesday barring Minneapolis employees from helping outside agencies that are seeking to prosecute women who travel to Minneapolis for abortions, except when required by court order or another regulation.

Minneapolis officials said Wednesday that they hope to make the city a "safe haven" for people seeking abortions and reproductive health care by limiting city employees' ability to assist agencies that might attempt to prosecute them.

"The message to Minneapolis residents, the message more broadly to other cities and states around us, is if you need that basic health care service of abortion, we in Minneapolis are a safe haven," Mayor Jacob Frey said Wednesday, moments after he signed an executive order putting new restrictions in place.

The new order comes weeks after the U.S. Supreme Court overturned Roe v. Wade, which had for nearly half a century guaranteed a constitutional right to abortion. Cities and states across the country are now weighing whether they want to restrict or further enhance access to abortion, emergency contraception and other services as the nation gears up for another high-stakes election cycle.