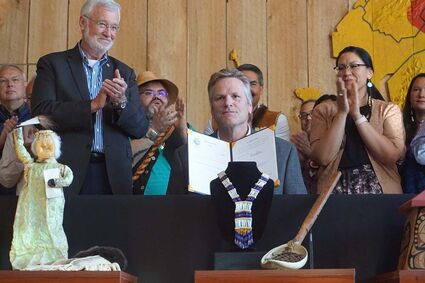 Gov. Mike Dunleavy, after signing the bill on state recognition of tribes, holds up the legislation at at July 28 ceremony at the Alaska Native Heritage Center. Standing with him are Rep. Tiffany Zulkosky, sponsor of the bill, and Sen. Gary Stevens, sponsor of a tribal education bill that Dunleavy also signed at the ceremony. In front of them are works of art from the Alaska Native Heritage Center's collection that represent different regions of the state. (Photo by Yereth Rosen/Alaska Beacon)

Though the bill does not significantly change the relationship between the state and the sovereign tribal governments within its borders, Rep. Tiffany Zulkosky, D-Bethel, said the measure is an "important first step toward healing and recognizing our past."