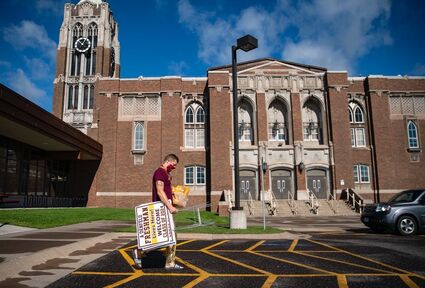 Nathan Shaw, an English teacher at Denfeld High School in Duluth, carried lawn signs to hand out to incoming freshmen during orientation in 2020. Black students in the Duluth school district have been disproportionately ticketed by police in school.

DULUTH - When students returned to Denfeld High School last fall after more than a year learning outside its halls, the number of disruptive fights and dangerous assaults was unlike anything principal Tom Tusken had seen in nearly three decades working in schools.

"We faced some extraordinary circumstances this fall," he said, "the likes of which we haven't seen, ever."

It led to more than 30 police citations in September and October, most of them to Black students. And it reflected a trend in Duluth schools of Black students being disproportionately ticketed by police.