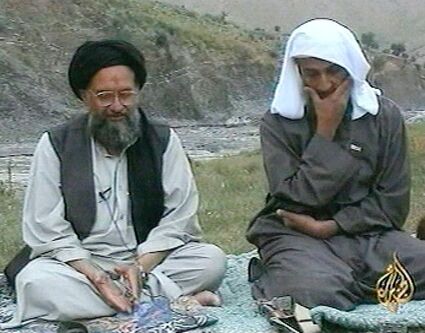 In this television image from Arab satellite station Al-Jazeera, Osama bin Laden, right, listens as his top deputy Ayman al-Zawahri speaks at an undisclosed location, in this image made from undated video tape broadcast by the station April 15, 2002. A U.S. airstrike has killed al-Qaida leader Ayman al-Zawahri in Afghanistan, according to a person familiar with the matter. President Joe Biden will speak about the operation on Monday night, Aug. 1, 2022, from the White House.

WASHINGTON - President Joe Biden expressed hope Monday that the killing of al-Qaida leader Ayman al-Zawahri brings "one more measure of closure" to families of the victims of the Sept. 11, 2001, attacks on the United States.

Biden made the comments as he confirmed that a U.S. drone strike in Afghanistan this weekend killed al-Qaida leader Ayman al-Zawahri.

"He will never again, never again, allow Afghanistan to become a terrorist safe haven because he is gone and we're going to make sure that nothing else happens," Biden said in an address from the White House formally announcing the operation.