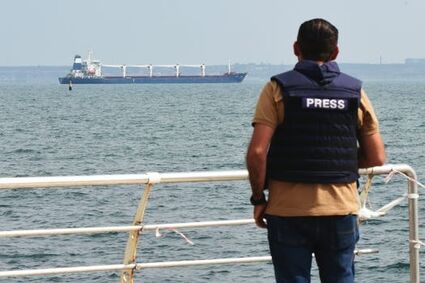 A journalist watches as the bulk carrier Razoni starts its way from the port in Odesa, Ukraine, Monday, Aug. 1, 2022.

KYIV, Ukraine - The first ship carrying Ukrainian grain set out Monday from the port of Odesa under an internationally brokered deal to unblock the embattled country's agricultural exports and ease the growing global food crisis.

The Sierra Leone-flagged cargo ship Razoni sounded its horn as it departed with over 26,000 tons of corn destined for Lebanon.