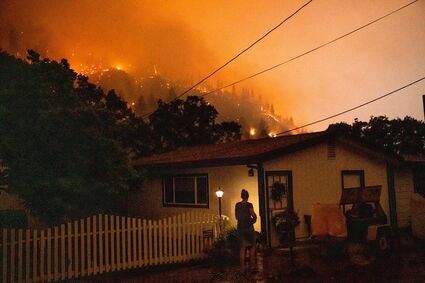 Angela Crawford walks past her home as a wildfire called the McKinney fire burns above it in Klamath National Forest, Calif., on Saturday, July 30, 2022. Crawford and her husband stayed, as other residents evacuated, to defend their home from the fire.

REKA, Calif. - Crews battling the largest wildfire so far this year in California braced for thunderstorms and hot, windy conditions that created the potential for additional fire growth Sunday as they sought to protect remote communities.

"The fuel beds are so dry and they can just erupt from that lightning," Freeman said. "These thunder cells come with gusty erratic winds that can blow fire in every direction."