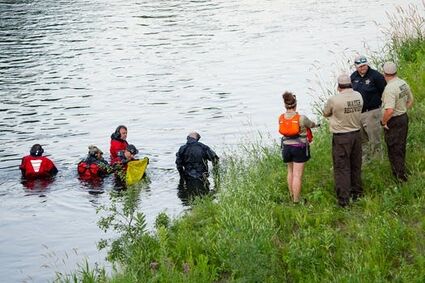 Water Recovery authorities combed the Apple River with metal detectors after five people were stabbed while tubing down the river Saturday near Somerset, Wis.

A 17-year-old Stillwater boy was killed and four others injured Saturday in a knife attack on the Apple River in western Wisconsin. A 52-year-old Prior Lake, Minn., man was arrested, St. Croix County Sheriff Scott Knudson said.

"Thank goodness a witness had taken a photo of him," Knudson said. "Another witness located him at the exit of the tubing area, where he was taken into custody."

The victims and suspect were all tubing down the river around 3:45 p.m., he said. The attack happened just upstream from the Hwy. 35/64 bridge in Somerset Township, close to the Minnesota border to the north and east of Stillwater. The Apple River has long been a popular summer recreational destination for Twin Cities residents.