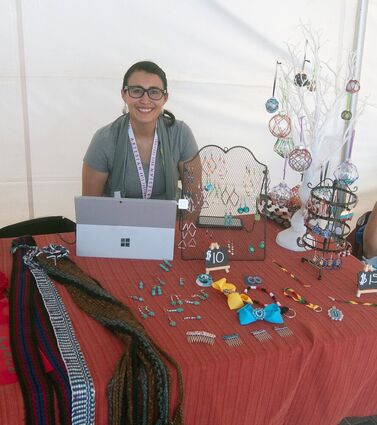 SULPHUR, Okla. – Cotie Poe-Underwood soaked up the experience of showing her art publicly for the first time at the Artesian Arts Festival recently. Since COVID-19 emerged two and a half years ago, she could only offer her work virtually.

"It was my first art show where there was an opportunity to actually talk to people and get feedback immediately. It was great and makes me anxious to prepare for SEASAM," she said.

SEASAM is the Southeastern Art Show and Market hosted annually during the Chickasaw Nation's Annual Meeting and Festival in Tishomingo.

Underwood, a Chickasaw artist, took home a second-place award in beadwork for a bolo titled "The Runner." It pays homage to the fact Chickasaw men would run great distances in the Mississippi ancestral Homeland before the tribe was removed to Indian Territory in 1837.

"I have read and have heard accounts of how Chickasaw men would run to destinations. Running was constant, unless they were hunting or scouting," Underwood said. "The Runner" bolo honors them. I purposely beaded it with colors faithful to what our ancient ancestors would have had available to them," she said.

"I don't want my beadwork to be super colorful. I want art crafted with what we would have used centuries ago. I only want the main parts to stand out. On 'The Runner,' I beaded his moccasins in cooper color to illustrate the focus of the piece."

"I remember my father, who was kind of short and stocky, but he could outrun anyone on the softball field," Underwood said. "So, yeah, I think it is a Chickasaw genetic trait passed down for generations. The Chickasaw people were runners. I wanted to bead 'The Runner' because he reminds me of my dad," she said.

Her father, Tony Poe, unfortunately was claimed by COVID-19 in February 2021. He served the Chickasaw Nation for 35 years in the office of environmental health, receiving a prestigious Indian Health Service award for his work to ensure healthy living conditions for Chickasaws. Her mother, Andrea, preceded him in death in 2018.

Underwood has dedicated herself to produce art authenticated by experts and archeologists as crafted by Chickasaws in ancient times. "The Runner" is an example. The image has been found on carved shells, pottery and gorgets.

While her personal research is intensive, Underwood relies on one book particularly to inspire her art. "Sun Circles and Human Hands" was written and published in the 1950s. It is considered one of the most important chronicles of prehistoric Southeastern First Americans and the artifacts they left behind.

"I really want to get those ancient symbols out to the public because their meaning and their link to Chickasaws are missed," Underwood said.

Underwood has worked for the Chickasaw Nation for more than 11 years, beginning with the school-to-work program, then casinos and various jobs before landing in the culture and humanities department.

"I wanted to explore, and I am still exploring, who I am as a Chickasaw woman. That department opened many doors for me. I have stomp danced since I was 14. When I went to work at the Chickasaw Cultural Center, I not only danced and entertained, but also interacted with visitors to share my Chickasaw heritage."

Born in Ada, Underwood spent her youth within a 30-mile radius of communities such as Pontotoc, Connerville and Tishomingo. She attended McLish Public Schools and recalls the student body was comprised mostly of First American students.

She graduated from Mill Creek and attended Murray State College, earning an associate degree in business administration. She then attended Ada's East Central University, earning a bachelor's degree in interdisciplinary studies with a certificate in hospitality and event planning. To top off her education, she earned a master's in business administration with a specialty in Native American Leadership from Southeastern Oklahoma State University in Durant.

"I usually take along an art project when I travel," she said with a laugh. "Sometimes, I am too busy to put much effort into it. But there are other times, when it's quiet and you're alone, where I can focus entirely on the work. My passion is to get important art out to the public that will raise awareness about Chickasaw heritage," she noted.

Her other passion is raising six children to learn and cherish the heritage as she does.

"I want the children I'm raising to be proud Chickasaws and I want them to tell people, 'My mom dragged me to every stomp dance in Oklahoma my whole life,'" she added with determination in her voice.

So how does a young Chickasaw woman work full time, raise six children and tend to all the elements of a career and family life?

"You learn to make time. You also learn to reach out to other Chickasaws for ideas, suggestions and inspiration," Underwood said, adding she has learned from world renowned Chickasaw weaver Margaret Roach Wheeler and Dixie Brewer, cultural activities manager for the department of culture and humanities, who is an accomplished artist and traditional storyteller. Underwood is one of several Chickasaw artists carrying tribal culture forward through the skills she has learned from those who have paved the way. 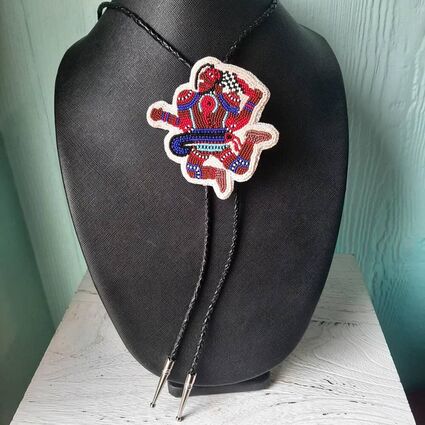 Cotie Poe-Underwood's "The Runner" won an award for beadwork at the Artesian Arts Festival.

The Artesian Online Art Market provides an opportunity to view the works of talented Chickasaw and First American artists. Hosted by the Chickasaw Nation at ArtesianArtsFestival.com, the 2022 virtual market is open until Aug. 1, providing opportunities for guests to browse and purchase the work of several First American artists. Transactions will be between the artist and the buyer. ArtesianArtsFestival.com will be updated with new artwork throughout the market.