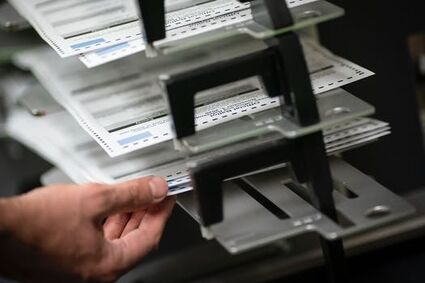 Poll workers sort out early and absentee ballots on Election Day in 2020, in Kenosha, Wis.

MADISON, Wis. - A Wisconsin judge said Thursday that a Republican-ordered, taxpayer-funded investigation into the 2020 election found "absolutely no evidence of election fraud," but did reveal contempt for the state's open records law by Assembly Speaker Robin Vos and a former state Supreme Court justice he hired.

Dane County Circuit Judge Valerie Bailey-Rihn awarded about $98,000 in attorneys' fees to the liberal watchdog group American Oversight, bringing an end in circuit court to one of four lawsuits the group filed. Vos's attorney, Ron Stadler, said he was recommending that Vos appeal the ruling.

The fees will be paid by taxpayers, which is why the judge said she was not also awarding additional punitive damages against Vos. Costs to taxpayers for the investigation, including ongoing legal fees, have exceeded $1 million.