Kim threatens to use nukes amid tensions with US, S. Korea 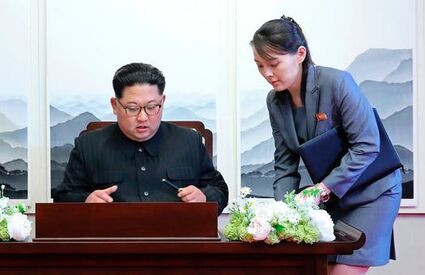 In this April 27, 2018, file photo, North Korean leader Kim Jong Un signs a guestbook next to his sister Kim Yo Jong, right, inside the Peace House at the border village of Panmunjom in Demilitarized Zone.

SEOUL, South Korea - North Korean leader Kim Jong Un warned he's ready to use his nuclear weapons in potential military conflicts with the United States and South Korea, state media said Thursday, as he unleashed fiery rhetoric against rivals he says are pushing the Korean Peninsula to the brink of war.

Kim's speech to war veterans on the 69th anniversary of the end of the 1950-53 Korean War was apparently meant to boost internal unity in the impoverished country amid pandemic-related economic difficulties. While Kim has increasingly threatened his rivals with nuclear weapons, it's unlikely that he would use them first against the superior militaries of the U.S. and its allies, observers say.

"Our armed forces are completely prepared to respond to any crisis, and our country's nuclear war deterrent is also ready to mobilize its absolute power dutifully, exactly and swiftly in accordance with its mission," Kim said in Wednesday's speech, according to the official Korean Central News Agency.