With staunch GOP opposition to the $739 billion package, Democrats have no votes to spare in the Senate 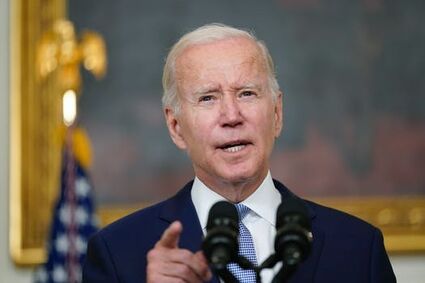 President Joe Biden speaks about "The Inflation Reduction Act of 2022" in the State Dining Room of the White House in Washington, Thursday, July 28, 2022.

WASHINGTON - President Joe Biden hailed a nascent Democratic package of climate, health care and tax initiatives as "a giant step forward" for the country Thursday as congressional leaders began nailing down votes for a campaign-season bill they've cast as a boon for voters struggling with inflation.

A day after Senate Majority Leader Chuck Schumer and conservative Sen. Joe Manchin stunned Washington by resurrecting components of a compromise many thought dead, early signs were encouraging for the party.

After Schumer briefed Democratic senators on the 725-page measure, Sen. Chris Van Hollen, D-Md., said lawmakers' reaction has been "uniformly positive." And Reps. Tom Suozzi, D-N.Y., and Tom Malinowski, D-N.J., suggested they could back the measure even though it lacks higher federal tax deductions for state and local taxes that they've championed in the past.