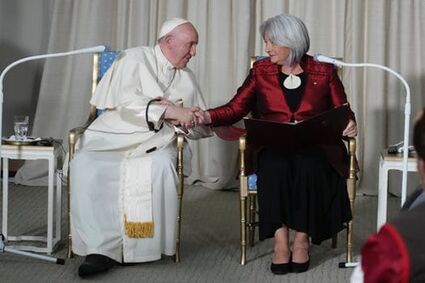 QUEBEC CITY - The Canadian government made clear Wednesday that Pope Francis' apology to Indigenous peoples for abuses in the country's church-run residential schools didn't go far enough, suggesting that reconciliation over the fraught history is still very much a work in progress.

The official government reaction came as Francis arrived in Quebec City for meetings with Prime Minister Justin Trudeau and Governor General Mary Simon at her Quebec residence, the hilltop Citadelle fortress, on the second leg of Francis' week-long visit to Canada.

The government's criticisms echo those of some survivors and concern Francis' omission of any reference to the sexual abuse suffered by Indigenous children in the schools, as well as his original reluctance to name the Catholic Church as an institution bearing responsibility.