The seminal referendum acts as a guide for tribal leaders, who will now decide whether to ask voters to amend the tribe's constitution 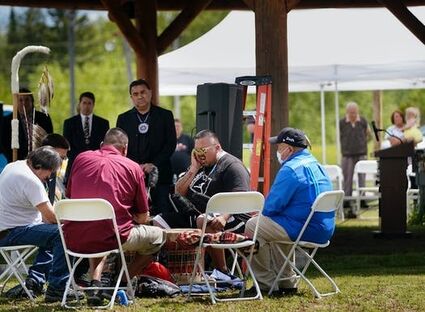 The Bois Forte Singers, including lead singer David Morrison Jr., center, performed an honor song during a ceremony at the Bois Forte Reservation in June.

DULUTH - Citizens of the Minnesota Chippewa Tribe have weighed in on the decades-old question of whether tribal blood should be a requirement to belong, and the answer is a definitive "no."

The MCT announced recently that about 65% of voters say the blood quantum requirement should be removed as a prerequisite to membership of the tribe, made up of six reservations. Nearly 60% say each reservation - Fond du Lac, Mille Lacs, Bois Forte, Grand Portage, White Earth and Leech Lake - should be allowed to determine its own enrollment requirements.

Less than a quarter of the tribe's roughly 32,500 eligible voters took part in this summer's seminal vote, which was meant to gauge whether tribal leaders should hold a binding referendum that could result in a constitutional amendment. The tribe's controversial constitution, forced upon them by the federal government more than 60 years ago, dictates its citizenship, rights, elections and governing body.