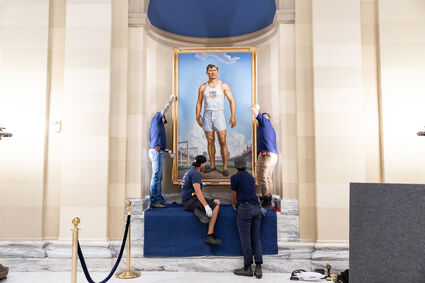 By coincidence, this portrait of Jim Thorpe was reinstalled at the Oklahoma State Capitol one week before Friday's announcement. (Photo/Oklahoma Arts Council)

Jim Thorpe, a citizen of the Sac and Fox Nation, is an iconic hero among Native Americans. He was a dominant college athlete, a medal-winning Olympian and a Hall-of-Fame professional football player. He also played professional baseball and basketball, for good measure.

His reputation was perhaps cemented when King Gustav of Sweden called him the "greatest athlete in the world" upon presenting Thorpe with two Olympic gold medals at the 1912 Olympic Games in Stockholm. Thorpe had earned the medals with dominating performances in the decathlon and pentathlon, giving Native people a great deal of pride - and some bragging rights - when talking about Thorpe.

Unfortunately, as most Native Americans know, Thorpe's story of Olympic excellence did not end there. One year after winning gold, the medals were stripped from him by the International Olympic Committee (IOC) after it was discovered Thorpe had been compensated-payment that amounted to the cost of his room and board-for playing minor league baseball prior to participating in the 1912 games.