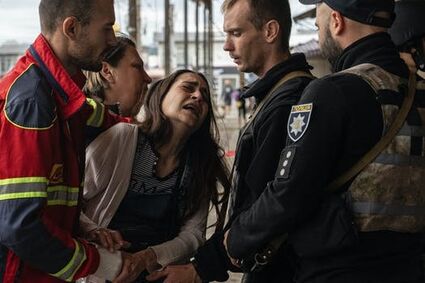 Sabina cried after her husband, Artem Pogorelets, was killed by Russian shelling at Barabashovo market in Kharkiv, Ukraine, Thursday, July 21, 2022.

KHARKIV, Ukraine - Russian shelling pounded a densely populated area in Ukraine's second-largest city Thursday, killing at least three people and injuring at least 23 others with a barrage that struck a mosque, a medical facility and a shopping area, according to officials and witnesses.

The bombardment came after Russia on Wednesday reiterated its plans to seize territories beyond eastern Ukraine, where the Russian military has spent months trying to conquer the Donbas region, which is south of Kharkiv. It also followed Ukrainian attacks this week on a bridge the Russians have used to supply their forces in occupied areas near Ukraine's southern Black Sea coast.