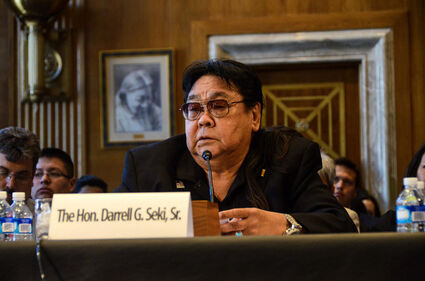 Voters of the Red Lake Nation returned Darrell G. Seki, Sr. to the chairman's position, according to unofficial results.

The outcome was close. The unofficial tally from the run-off election shows Seki defeating Floyd "Buck" Jourdain, a former chair, by just 102 votes.

An even closer result was seen during an election on May 18. Jourdain had come out ahead of Seki by just three votes in that race.

Since neither candidate in the earlier election won more than 50 percent of the vote, the run-off was held on Wednesday.

Four council seats were also up for grabs. In two districts, newcomers won election. In two other districts, the incumbents were ousted, the unofficial results show.

Back in May, Secretary Sam Strong won re-election in another close race. Vernelle Lussier won the Treasurer seat. The incumbent did not run.

Seki has served as chair of the Red Lake Nation since 2014. He will now enter his third term in office.

The tribe is based in northern Minnesota.