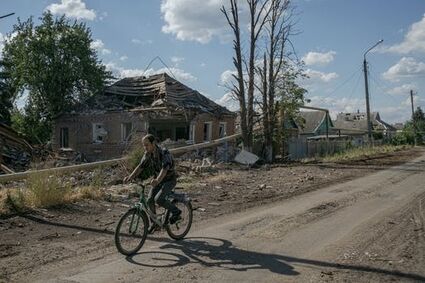 A man rides his bike past homes hit by a recent bombardment in Siversk, Ukraine, on Tuesday, July 12, 2022.

KYIV, Ukraine - Russian missile strikes in Ukraine's southern city of Mykolaiv killed at least five people, Ukrainian authorities said Wednesday, part of a series of artillery and missile barrages across the country in the past day that left at least 10 dead and dozens wounded in eastern and southern regions.

While Mykolaiv has repeatedly been the target of Russian fire in recent days, Russian missiles also struck the city of Zaporizhzhia on Wednesday, an attack that could signal Moscow's determination to hold onto territory in Ukraine's south as it aims to fully conquer the east. Ukrainian forces have stepped up actions in a bid to reclaim more territory in the south.

Also Wednesday, the top U.S. diplomat accused Russia of committing a "war crime" by forcibly deporting hundreds of thousands of Ukrainian men, women and children to Russia with the intention of changing Ukraine's demographic makeup.