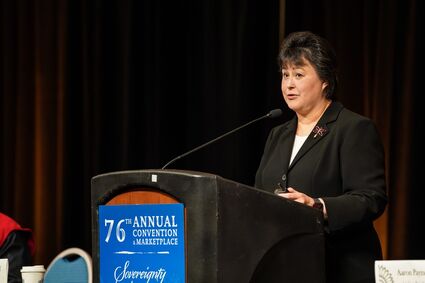 Yvette Roubideaux has served as director of the National Congress of American Indians Policy Research Center (PRC) since April 2017. Photo by Kevin Abourezk

The National Congress of American Indians is bidding farewell to one of its highest-ranking employees this week.

Yvette Roubideaux, a citizen of the Rosebud Sioux Tribe, is due to step down as director of NCAI's Policy Research Center (PRC) on Friday. She has served in the leadership role since 2017, one in which she oversaw a small staff that focuses on the ways in which tribal, federal and state policy affect Indian Country.

Roubideaux's departure has long been in the works, owing primarily to family obligations. An NCAI spokesperson confirmed that she is leaving to take care of her elderly mother, as indicated in a resignation letter she previously submitted to the largest inter-tribal advocacy organization in the United States.