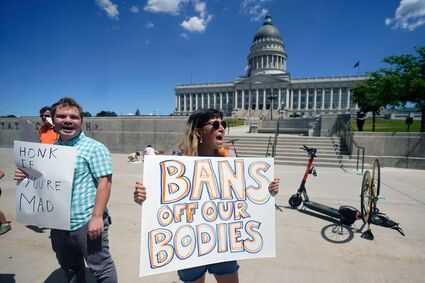 Maria Rago demonstrates for abortion-rights at the Utah State Capitol on June 24, 2022, in Salt Lake City. A judge in Utah on Monday, July 11, 2022, did not allow the state's trigger-law ban on abortion to take effect while a Minnesota judge declared most of the state's restrictions on abortion unconstitutional, as the implications of the Supreme Court overturning Roe v. Wade are sorted out nationwide.

With the decision, abortion remains legal up to 18 weeks in Utah, which is among a group of states where abortion rights have been thrown into limbo amid the legal and political challenges shaping the post-Roe landscape with states now holding the power to restrict abortion.

"What I'm really doing is saying we have serious things to talk about," Judge Andrew Stone said after granting an injunction delaying the trigger law.