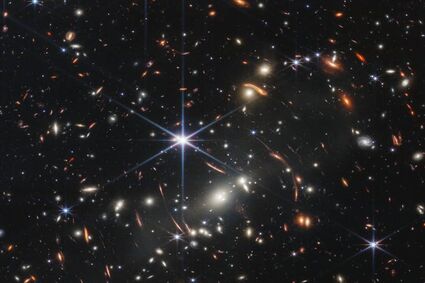 This image provided by NASA on Monday, July 11, 2022, shows galaxy cluster SMACS 0723, captured by the James Webb Space Telescope. The telescope is designed to peer back so far that scientists can get a glimpse of the dawn of the universe about 13.7 billion years ago and zoom in on closer cosmic objects, even our own solar system, with sharper focus.

Our view of the universe just expanded: The first image from NASA's new space telescope unveiled Monday is brimming with galaxies and offers the deepest look of the cosmos ever captured.

The first image from the $10 billion James Webb Space Telescope is the farthest humanity has ever seen in both time and distance, closer to the dawn of time and the edge of the universe. That image will be followed Tuesday by the release of four more galactic beauty shots from the telescope's initial outward gazes.

The "deep field" image released at during a brief White House event is filled with lots of stars, with massive galaxies in the foreground and faint and extremely distant galaxies peeking through here and there. Part of the image is light from not too long after the Big Bang, which was 13.8 billion years ago.