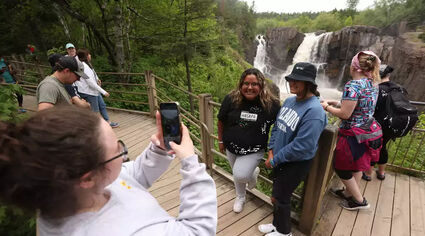 A group of educators gathered around a canoe display at the Grand Portage State Park welcome center. Rick Novitsky, who used to be the park manager, began telling a story about how the Grand Portage band of Chippewa turned this land on the banks of the Pigeon River and the Canadian border from private property into reservation land and a state park.

"It's become the destination that it always was - now for tens and thousands of visitors every summer and winter," Novitsky said, "It's the only state park in Minnesota that is not on state land."

He spoke to more than 50 teachers from district schools, charters, colleges and K-12. They'd come from around Minnesota to spend a week training on the northernmost tip of Minnesota, next to Lake Superior, learning the history and present-day work of the Grand Portage Band of Chippewa.

After listening to Novitsky talk about the tribe's DNR work stocking fish, buying land and counting wildlife moose populations, the educators leave the welcome center and begin hiking up to High Falls - the tallest waterfall in Minnesota. 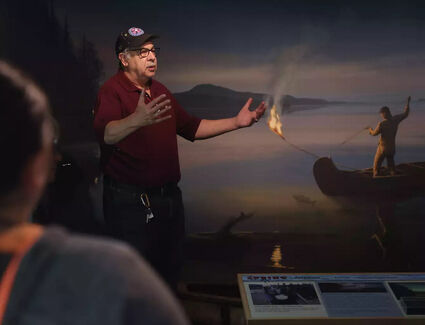 The lecture and tour are part of a week-long educator training program called the Native Studies Summer Workshop for Educators. Darlene St. Clair, associate professor at St. Cloud State University, helped found the workshop and has been organizing and leading summer training sessions for more than a decade.

It's meant to address a dearth of educator preparation to teach Native content. A recent statewide survey of educators commissioned by the Shakopee Mdewakanton Sioux Community found that most Minnesota teachers lack the confidence to incorporate Native American content into their teaching practice. They also said access to Native tribes or individuals was the most significant factor necessary to increase their confidence in teaching. Nearly 30 percent said they didn't have age-appropriate, culturally authentic resources to teach Native content.