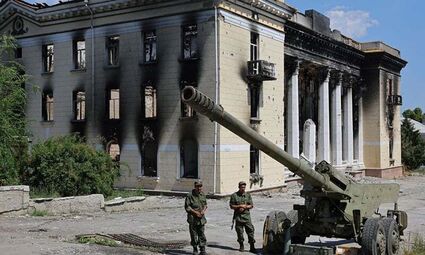 Service members of pro-Russian troops stand next to a howitzer during an exhibition of Ukrainian army hardware and weapons left in the city after its withdrawal during Ukraine-Russia conflict in Lysychansk, Ukraine on July 8, 2022. - Reuters

KYIV: Ukrainian defenders battled on Saturday to contain Russian forces along several fronts, officials said, as the United States pressed China to align itself with the West in opposing the invasion following an ill-tempered G20 meeting.

A missile strike on the northeastern city of Kharkiv wounded three civilians, its governor said, though Russia's main attacks appeared focused southeast of there in Luhansk and Donetsk.

The two provinces, swathes of which were already held by pro-Russian separatists before Russia's invasion in February, comprise the eastern industrial region of the Donbas.