Minneapolis orders residents at three homeless encampments to clear out

The camps at Near North, Midtown Phillips and the Quarry add up to as many as 180 people 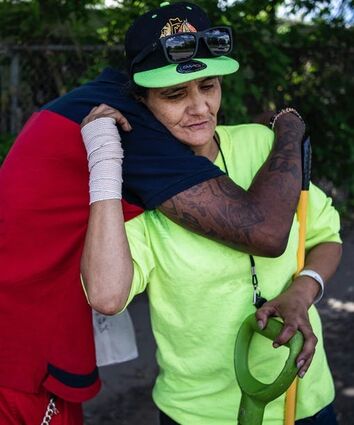 Angel Beaumaster got a hug from "Feenix" for all the good she did looking out for fellow residents in the Near North encampment in Minneapolis on June 9, when residents organized a cleaning day. Near North is one of the city's oldest encampments and a battleground between the city and sanctuary movement activists.

Andrew and Ashley Vizenor count themselves lucky. Within days of the city of Minneapolis ordering everyone out of the homeless encampment at 29th Street and 14th Avenue S., they were assigned an apartment at American House in St. Paul.

They packed their bags Wednesday afternoon in high spirits, eagerly awaiting the arrival of caseworkers to help them move. Still, they worried about the fate of friends left behind.

Minneapolis posted vacate notices June 27 at the Midtown Phillips encampment after neighbors raised concerns about vandalism and safety. It could be cleared at anytime. Similar notices were issued a few days later at the Near North camp at 205 Girard Av. as well as the Quarry camp, located in northeast Minneapolis. As many as 180 homeless campers in total may be forced out.