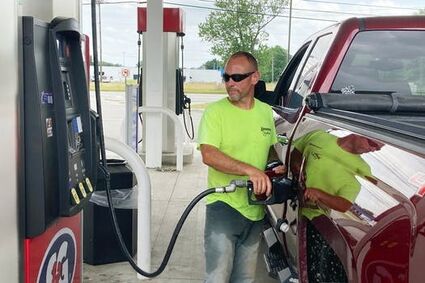 Pat Blevins, of Waterville, Ohio, fills the tank of his 2016 Chevrolet Silverado at an S&G gas station in Sylvania Township west of Toledo on Tuesday.

As Congress and now the Supreme Court stymie the Biden administration's efforts to curb climate change, one thing the president doesn't want - sky high gas prices - actually is nibbling away at emissions of heat-trapping gas.

Gas prices in much of the United States shot past the $5 a gallon mark last month before a slight drop, and Americans have responded by driving a bit less, two sets of data show. June gas sales are about 5% below pre-pandemic 2019 levels and 2.6% below a year ago, according to the U.S. Energy Information Administration.

Americans in April, the last month data was available, drove 6% fewer miles than the same month in 2019, according to transportation analyst Michael Sivak, a former University of Michigan professor who is a long-time tracker of driving and car-buying habits. That 6% drop is tiny compared to the 40% plunge in driving miles in April 2020 as the pandemic kicked in.