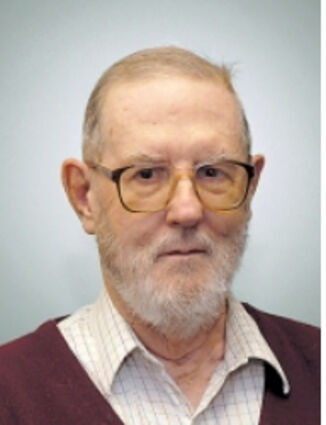 Jim was born November 14, 1928 in St. Petersburg, FL one month after the fall of Wall Street. He moved with his family to Newark, NJ in May of 1929 where his father joined the engineering department of Public Service Gas and Electric Company, the state's largest public utility and transportation corporation. The family moved progressively farther out into the suburbs to East Orange in 1930, Union Township in 1932 and Scotch Plains in 1942. He graduated from Scotch Plains High School in 1946. He graduated from Washington & Lee University in Lexington, VA in 1950 with a major in English and specialty in journalism. He began his radio career as a sports anchor of student late night nightly newscast over commercial station WREL his junior and senior years. He broadcast his first game, a basketball contest between W & L and Duke University from the Roanoke, VA Armory, Duke led by point guard Dick Groat who would go on to the fame as a player, coach, and manager in Major League Baseball and elected into the Hall of Fame.

Jim entered the US Army in December of 1950 and served in Signal Corps two years as a cryptographer, instructor, and a department supervisor with six months in Yokohama, Japan. He was discharged November of 1952. He enrolled in Cambridge School of Radio Broadcasting, NYC graduated in June 0f 1953. He began his radio Career at WLEU, Erie, PA under the same manager WREL during his college career. He left after one year when his station failed to produce any play by play games. He joined KBUN in Bemidji October of 1954 as a news and sports director, disc jockey, and staff announcer. He broadcast all home Bemidji High and BSU football and basketball games and some Bemidji High baseball contests and many road games plus all high school District 29 basketball games and Bemidji District baseball games. He left unexpectedly in June of 1958 but remained in Bemidji as office manager of Headwaters Translator Television Corp. the fund raising organization that brought television reception into the city.

He joined the Pioneer staff January 10, 1959 as a news reporter and photographer. He began covering local sports on the side, quickly advancing this post into this post into a second 40 hour a week job and was named sports editor late that spring. He held both positions through June of 1972 when a full time news reporter was added to the three person staff. That move coincided with the start of high school girls athletics which doubled the work load in sports. The high school program continually expanded from six to 22 sports during this period. He continued covering both high school and BSU sports through 1981 when second sports writer was added working seven day, 80-100 weeks. He created eight weekly columns, football and volleyball roundups in fall, girls' and boys' basketball roundup, Mat Chatter and hockey highlights in the winter, baseball round up in the spring and in 1979 Sunday Sportsline.

He continued writing all eight until the late 90's when drastic space reductions by previous ownership made it impossible to continue. He continued his seven day, 80 hour work load through the spring of 2010 when he was reduced to Sunday columnist though still continued to cover the most youth sports summer town baseball and other fringe area activities. He was elected to the Bemidji High Wrestling Hall of Fame in 1998, its second season and BHS Athletic Hall of Fame in 2002, its second year. In 2011 he was named sports contributor of the year by the Minnesota State High School Wrestling Coaches Association and later that year inducted into the State Wrestling Hall of Fame.

The highlight of his career was founding and coaching the Bemidji Braves Baseball team from 1963 – 1993 and founding and heading the Northern Lakes Youth Baseball League from 1965-1993, coaching well more than 1000 games in the 13-15 age bracket and winning close to 800 of them. Dozens of his players went onto star with the Lumberjacks with a number continuing on to the college ranks. He continued to promote youth baseball at all levels after his program was ended by the Youth Baseball Association in favor of an intramural structure rather than the accelerated learning program for the upper echelon players in the program. His estate will be set up to form the Carrington Foundation to support and promote Youth Baseball and other youth and high school sports, especially those lesser sports lacking in fund raising capabilities. Condolences may be left at ceasefuneralhome.com.